I just saw this on YT and remembers me in old age when i was palying ps1 RE keep on going grate work !!!

The style and content was awesome!
However, I did get stuck out of sight a couple of times (especially near the truck) and couldnt find a way to get out. The dino found me once, took a nibble, then walked off.
But the style and old school feel of the game was awesome! 9/10!

What a nice trip to memory lane it was. Old school horror games are the best. Awesome work creating the right vibes and introducing new elements. Will sure follow your work. 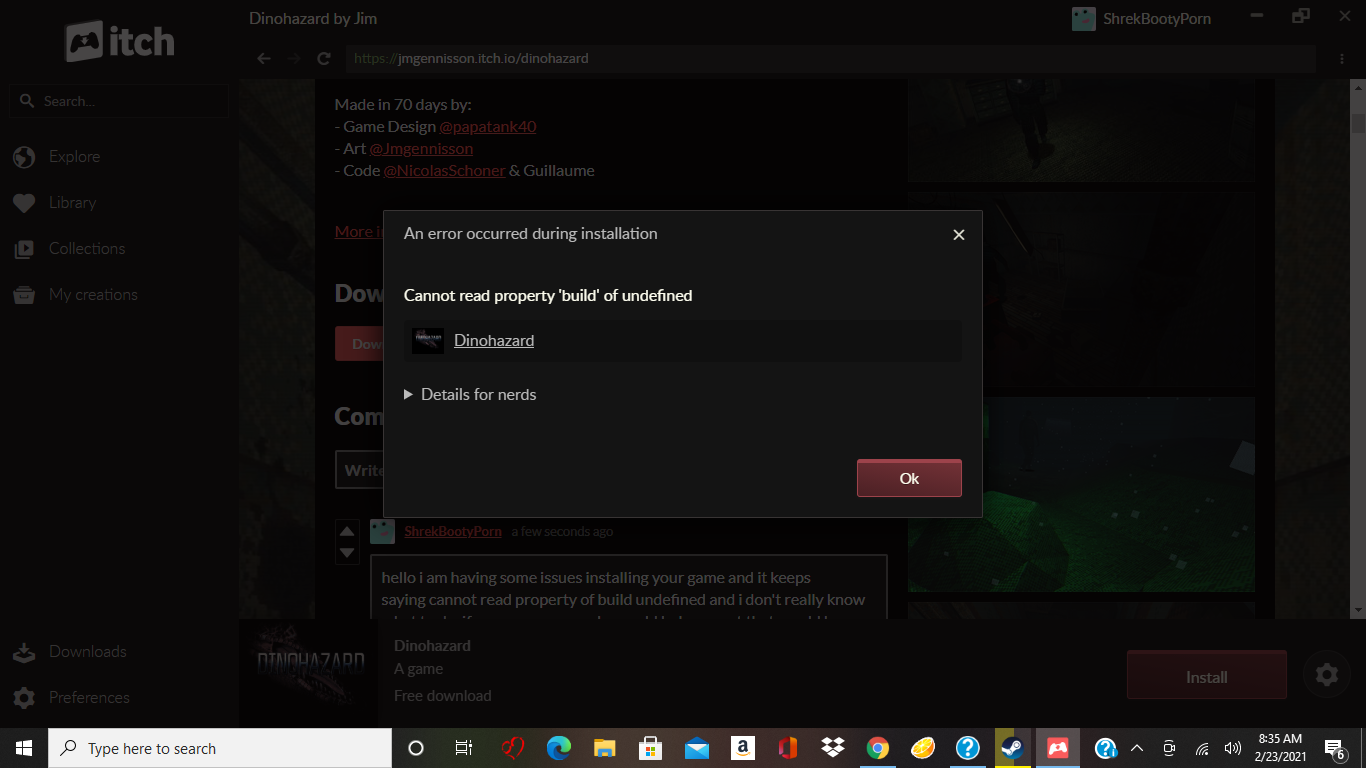 hello i am having some issues installing your game and it keeps saying cannot read property of build undefined and i don't really know what to do. if you or someone else could help me out that would be great thanks.

Great game overall!. I wasn't super crazy about the controls and the camera angles but they were workable and not so bad that it couldn't be played. I love these ps1 style horror games and the similar feeling it gives me to the old Silent Hill Games. I loved the dark, decrepit, creepy slightly hazy environment that gave it a super nice touch and made me feel less at ease. I feel like dinosaurs themselves were okay but some things could have been done to make them a little scarier like intense chase music or a scene or two where they jumpscare you but I understand that isn't everybody's style. Good Job I look forward to seeing more of your work.

Reply
IamRyanz1 year ago
an amazing game. The only flaw is the controls and the janky movement in general. other than that, 8/10 :))
Reply
BAYAEARAE1 year ago
dinosaur!
Reply
Leather_Rebel1 year ago(+1)(-1)

Does not work. Not installed.

Great game, though it could use a fix here and there in some controls and animations but over all I loved what you made here. I can't wait to see more of this game and more you will be making please keep on creating and keep it stylish Jim.

This game was awesome! After learning how to control my character lol. This was difficult yet kept me playing with excitement the whole time! Good job overall dev.

Hey Jim, you've got a great game on your hands here. I do have some suggestions, but I know this is a trial version so please understand that these concerns are about how the game is right now as I've played it, and not about how you intend for the game to be. My gameplay video is attached to this post but I see you have a ton of videos here to watch so I'll put it in writing to save you time (unless you want visual proof of what I'm talking about and also to have some fun watching ;))

Currently, the reveal of the Dinohazards is a bit lacking. In my opinion, monster reveals should instill fear in the player as well as impress them. As it is right now, I simply saw it from a distance and from the perspective of a player, that's a ton of time to desensitize to it's presence. The biggest fear becomes nullified quite quickly, and while I was still nervous to be caught, that didn't last for very long because they ran towards me very slowly all while making pretty cute tippy tap sounds. Once I knew they weren't a threat, I didn't really mind the dino's presence and completed objectives relatively tension-free while running around. Some camera angles could do a bit better of a job showing the scene. Another Issue is the introduction of many characters, but none of them serve any real purpose. As a player, I've never met these characters so they don't mean anything to me. It might be a good idea to introduce these characters and allow us to get to know them a bit before having them killed off.

I'm not entirely sure what your plans for this game are but I really do hope you flesh it out because this is exactly what I've been looking for as a fan of both Dino Crisis and Resident Evil. I wish you the best, and I definitely will be following you to keep in touch with the development of this game. If you have any questions, feel free to reach out in the comment section. Thanks again for the game, Jim!

Nice job on this demo, dude! I like what you're doing here so far and can't wait to see what else you do with it. The PS1 style is pretty awesome.

This game was super fun to play not even gonna cap

A very solid demo with a glimpse of what's to come. Looking forward to seeing if combat plays out well, and how the story goes.

Very good indeed! Got the Resident Evil/ Dino Crisis vibe, to me it feels like a respectful and well made homage to the great Dino Crisis series ^^

I absolutely enjoyed this game! I love The Thing references. I would love to see the whole game!

Reply
Lady Random1 year ago
This was awesome. It was very unsettling at the start because I was constantly afraid something was going to randomly pop onto the screen and eat my poor character. I find dino-related horror more scary than other types. It really gave me the feeling of the original Dino Crisis, which is great.

I loved the controls, graphics, sounds/music, and atmosphere. Dino animations/variety could use a bit of work but, I realize this is a trial version and what you have done is excellent so far. Can't way to see more.

Very awesome game! Enjoyed playing this on my channel :D I had a moment where I got stuck outside with the dino and couldn't see my character anymore so had to restart. But it's okay loved the game regardless!

I ended up raging a little bit because I am VERY BAD with tank controls LOL. Other than my lack of skill, this was a really good game! Nice buildup of tension, and great stealth moments. I enjoyed this!

I was so happy to see a game like this finally show up on here! I had so much fun playing this game I wish it was a huge story mode and it was just very fun and amazing because I love dinosaurs and when I saw this game I was super excited to play it!

Reply
Neco The Sergal1 year ago

Reply
Son Of God1 year ago

Reply
BetaHunter1 year ago
God, what a cool game!

I really enjoyed this game! The graphics were great, the controls good, the art-style great and the gameplay amazing.

The story is rather short, but is carried by the rest of the game.

I would however like if the game had a chase sequence and that exploration was rewarded a little more, meaning more than just story exposition can be found on the map. Like secret rooms, figures or references to Jurassic Park!

Great work, we featured this on the itch.io YouTube channel here: https://www.youtube.com/watch?v=xMeAY1LXCEo

I love the idea and I'm excited to see where it goes but the dinosaurs are a little funny. It's a good environment and a good homage to the classics plus the title is a cool reference too but the stealth is a little janky, I think a part of what makes animals scary is their keen senses like you feel as if you could put a foot wrong and pay for it whereas anything short of a marching band doesn't seem like it'll bother these guys!

Reply
KendoGunSop1 year ago
I think it's good, I like games in this style. I was also a little shocked when I found Edward's body. I hope that in the future there will be improvements in graphics only. For the others it's good.
Reply
Button Pushin' Cushion1 year ago(+1)

This is a GREAT start to something that could be incredible! I'm a massive fan of the original Dino Crisis so this was a nice little nostalgia blast! My only big gripe at the moment are the controls, they just felt like they needed to be tightened a little but I honestly loved every moment of this!

Just played through and I love the foundation you guys have started. The first thing that catches my eye the most are the visuals. Very atmospheric, hopeless, dreadful. It works well with the cold environments and dim lighting. The intro text looks like it's inspired by MacReady's message from The Thing (I love it)! Other than that, I wrote up a few points of feedback I hope you find useful:

- Looks like the music on the main menu doesn't loop.
- There's some overlapping with the character's light and the environment lights. You could solve this issue mostly by baking your environment lights.
- Character's light illumination doesn't extend out far enough (very dim), feels more like a lighter than a flashlight.
- Strange dialogue on discovering the first dismembered leg: "looks like it's missing its sister". It's feels a little out of place. Might be more impactful if the character says something like "have the [dinos] been through here?" Which eludes to an evil presence that you'll encounter soon.

- Dialogue line cutoff when outside "I won't walk away from the path, I can't risk getti-"

- Dinosaur animation is very rough (I imagine there will be more development on this).
- In regards to the dinosaur concept: I'm not super sold on plain looking raptor breeds being found in an arctic climate. It's a cool concept (no pun intended), but dinosaurs that may have ever existed in that type of environment would have had feathers or fur to cover near their head, neck, and body. It might be more believable once the dinosaur enemy design is fleshed out more, or made to look more "arctic". Take a look at some images of "polar dinosaurs", they may help the design a bit.

That's all I was able to come up with. I look forward to seeing more development on the game and best of luck to you guys!

I think you need to review your comment here and not come off so patronising. You make yourself sound like an absolute fool.

Plus putting someone's else's work down when all they were doing was trying to give some constructive feedback is pretty shitty. Get some manners before you start commenting on people's reviews.

"to treat in a way that is apparently kind or helpful but that betrays a feeling of superiority."

Great game! So climatic and intense.